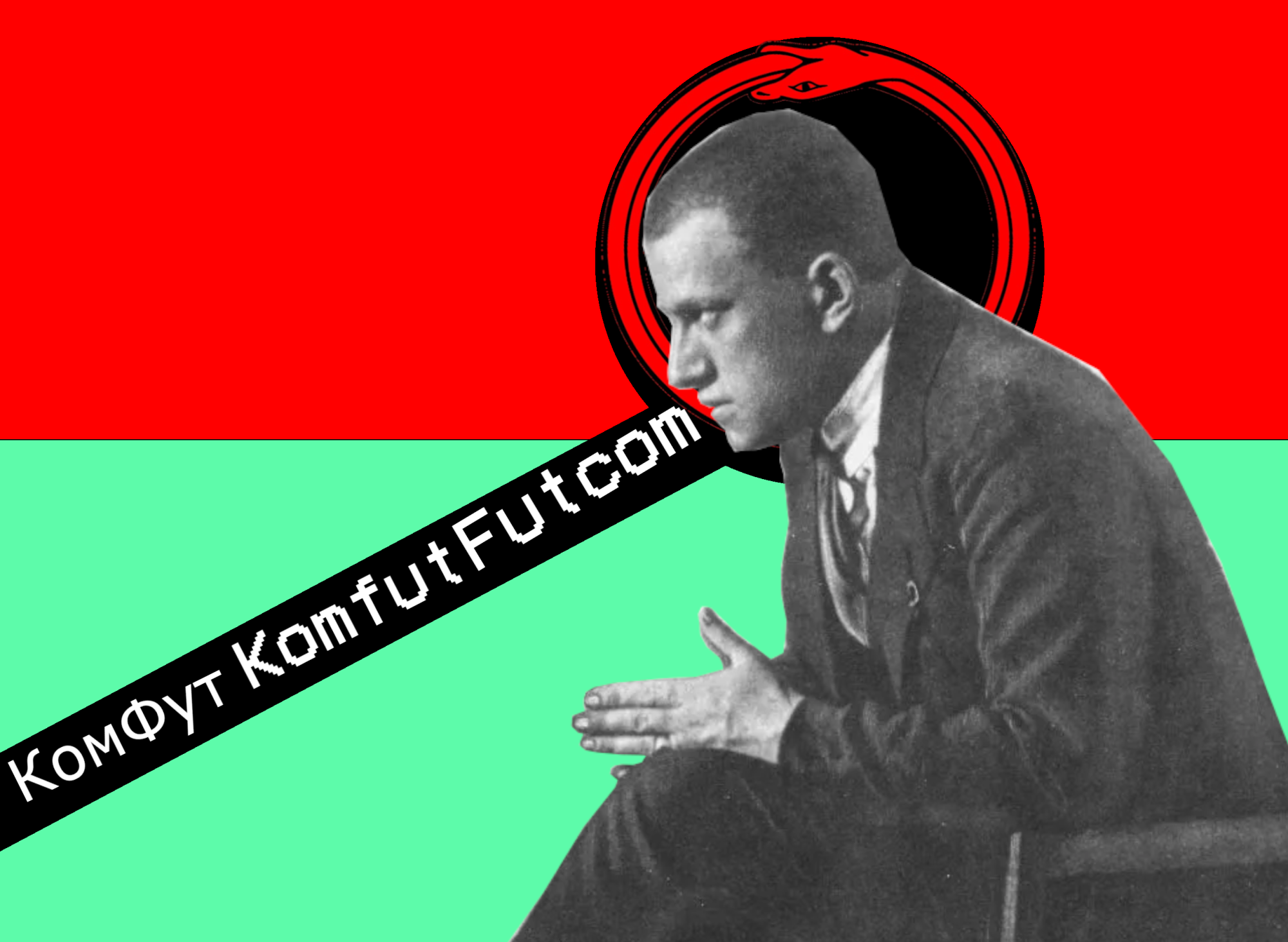 The potential of Futurism is in the fact that it has effectively died and been replaced by its successors in Dadaism, Surrealism and Expressionism, but this death (along with all things that die) can be replaced with something new. We should not mourn the futurism of old but embrace its messages, its goals and its vision of a future free from the hypocrisy of the past’s traditions. This potential is communism—KomFut (Communist Futurism).

Futurist poetry and art can be the precursor to the coming culture of the proletariat.

I don’t wish to talk about the failures of the past though, I want to revive the proletarian spirit for revolution, the urge for violence against those who would keep us in chains—in the eternal nightmare that we currently live in. To kill the nightmare you must kill the dreamer, and I have stopped dreaming of any situation that exists where a worker’s movement is built on charity and well intentions, it must be built on virility and speed.

The goals of Communism and Futurism are ultimately the same, the destruction of the past in favor of a world built on speed and the Future. Communism represents freedom for the proletariat and to a larger extent humanity, the withering of the value form and the state, a society of genuine freedom and individuality based on the reinvigoration of the human race. For the last six thousand years we have been shackled by the chains we have forged for ourselves, and while we benefit from the gains of these epochs, a little bit of ourselves is taken away. Communism means the destruction of this chain and the reunification of ourselves with the things we have lost, putting away the veil of death and putting on the crown of life.

Futurism represents all of these things. Violence as a reaction to capitalist society that promotes “peace” while contradicting itself by creating machines for the sole purpose of killing thousands. This is not because the Bourgeoisie are inherently hypocrites but rather that they are simply trying to hold back the monsters that they have created. By trying to keep the proletariat in a state of subservience they make us more jaded and angry, more prone to violent outbursts because we are no longer treated as human’s but as means of production. Futurism is the outlet for these outbursts. To reject tradition is to reject the morality and spirits that hold the worker in place, to open the gates of Rome to the horde of those they have enslaved.

Futurism as an art movement with Communist political philosophy merged is not only beneficial but without it all you will get is opportunism and bohemianism, the Futurist artist embraces Violence, Anti-moralism and Speed not because they are simply thrill seekers trying to be edgy, but rather because they are reacting to the confines of traditional society, of Bourgeois society. Communism must be destructive towards bourgeois art and society, the destruction of the current state of things as you will, trying to uphold some semblance of it will just lead to decay and counter-revolution, Communism must grab hold of Futurism and Futurism must embrace Communism not as two alien objects but two faces of the same Proletarian coin.

The liberation of Humanity from the grips of Mammon will not come from clean images and optimism of the contemporary “socialists”, it will only come from Dedication to Class war and willingness to get your hands dirty, to tarnish yourself in the boo’s of the geriatric and liberal, to dance in the disgust from the conservative and cowardly, Spectacle as a tool for propaganda should be embraced rather then turned down because in Bourgeois society it is spectacle that wakes the energy(good or bad) of the Proletariat.

Avanti Barbari has become a popular slogan among Communists, but why?

Because it represents the growing disgust with the current state of Communism, by embracing the Barbarism that the bourgeoisie have created, we are throwing aside the legal fetishism that the social democrats and Stalinists have tried to cultivate among their followers. The workers movement and the Laws of the Bourgeoisie are inherently antagonists to one another, by trying to reconcile the two will only land them in stagnation and irrelevancy as the workers they have been able to convince to join their merry band leave because they have seen the cowardice inherent within these “Marxists”.

Futurism in the early USSR was popular with the Proletariat because it represented the rejection of the past that had been exploiting them for centuries, it was the sword beheading the King, in the US we see this same thing, the proletariat does not care for the works of the past because it has no reason to, all they see is the prissy strings of a decadent class that works them till their old and throws them into the ruins of the world they have destroyed.

Sucking out the beauty of Humanity, quashing its creativity with commodified paintings and intelligentsized definitions of what is and isn’t art. Futurism stands in the way of this, bringing with it renewed hope in the world that will come from the destruction of Bourgeois society. What are we to do with the art of the past that fetishizes false reality? Throw it into the fire along with the politics of the old, I am not a Marxist because I want to live in a “socialist” country that no longer exists, a country that suppressed the Proletarian movement in 1929, I am a Marxist because I believe in a world where I am free. I believe in the potential of the future where we have conquered the universe, where the brotherhood of man has destroyed the last vestiges of class society.

To be a Marxist is to be a Futurist, to deny this is to deny the very core of Marxist principle. Stalin tried this and in doing so he turned it into a mockery which still haunts Marxism to this day, Kautsky and Plekhanov did this and we still live in the shadow of electoral fetishism and supplementing Marxism with liberalism, Lassalle started this trend and is still remembered as the greatest of all Opportunists(even surpassing Stalin). Marxism embraces the fire of revolution, Marxism rejects the hypocritical morality of the bourgeoisie and most importantly Marxism embraces the Future that will come with Communism.

The potential of Futurism is in the movement of Communist Futurism(KomFut), the art of violence, speed, virility and rejection of Bourgeois modernity.

Ouroboros, the great world eater. The symbol of a snake biting its own tail to represent Life, Death and Rebirth. Another representation that not a lot of people have found for it though is how it represents Dialectics, the relationship of two entities that cannot exist one another even if they are hostile enemies, their relationship is what defines their consciousness. The only way to transcend this relationship would mean the destruction of one and the destruction of the other, the only way for the Serpent to stop eating its tail would be the death of the serpent. Just like how the abolition of the proletariat is only possible with the death of the capitalist mode of production.

the Ouroboros as the symbol of Communist Futurism, the embracing of the eternal cycle of death and life that follows us, it does not have to mean that we are doomed to continue living under tyranny and despotism, but rather it means that we can be free from the class society that has defined our species for the last 6 thousand years. Capitalism is not the end because Communism is the Future.

I will finish this with a quote from a Italian Futurists essay on the relation between Futurism and Fascism vs Futurism and Communism:

“As for Futurism, it might as well be recognized that it has found its logical home in only a single state: in Russia. There Bolshevism and Futurism have formed a happy alliance. The official art of Bolshevism has been Futurism. The monuments to the Revolution, its propaganda posters, even its books have shown the impress of Futurist art and ideas. And that is perfectly logical and coherent. The two revolutions, both anti historical, have always been allies. Both want to destroy the past and remake everything on a new foundation of an industrial sort. The factory has been the wellspring of Bolshevist political ideas; and it has also been the inspiration for Futurist art”