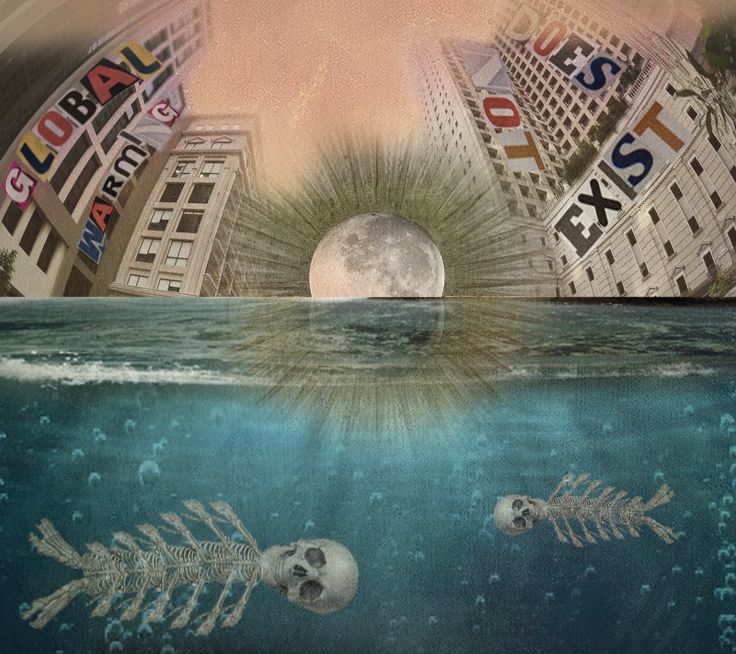 There is perhaps no larger issue facing us than climate change, or rather more aptly put, the climate catastrophe. Something that has been largely ignored for decades, the issue of climate is putting the whole world at risk, but some are more responsible for the current status quo than others. Despite the recent, considerable media and political coverage, it seems that not much has been changed for the better. Whether it is the worlds’ biggest newspapers, or the worlds’ most powerful politicians, not enough has been done to avert the climate catastrophe, despite the gravity of the situation and the influence of those who have addressed it. This is, to me, because none of the current institutions have ever, or will ever, address the root cause of this catastrophe – capitalism. No amount of bandaids that the capitalist power structure tries to place will change the fact that it is capitalism, and its inherent dynamics, that are what is causing this catastrophe.

No matter how many climate protests we attend, capitalism will not stop its destructive force. The issue here, apart from the principle that to fight for a green earth we must be anti-capitalists, is that despite the situation continuously getting worse – radical solutions seem to be hidden far away from the general population. Why is that? If you look at different data published, it seems clear that the current efforts are just not enough, and yet, most people do not consider anti-capitalism to be the solution.

This is due, in part, to the phenomenon of faux environmentalism that has arisen in the past decades. As people look for a solution to climate change, governments and states try their hardest to push away and isolate the perhaps obvious solution of anti-capitalism, in favour of faux environmentalism. For the people, it is easier to imagine a world where enough reforms, carbon taxes and ‘green deals’ are successful in curbing carbon emissions rather than one where capitalism is done away with altogether.

In the West, governments have encouraged us to practise our inalienable right to protest, just as long as it does not threaten global capitalist hegemony. Just in 2021, there had been over 200 protests for more action against climate change, and yet, we are not on track to meet any goals that have been internationally set. Around the world, agreements such as the Paris Climate Accords (2015) and the Kyoto Protocol (1992) have been signed by all nations, conferences such as the COP26 in Glasgow (2021) have been attended and observed by the leaders of all major countries.

The Paris Climate Accords can perhaps be considered the pinnacle of faux environmentalism, with 195 country signatories, it has continuously been shown that it has not, and will not, curb the effects of climate change. 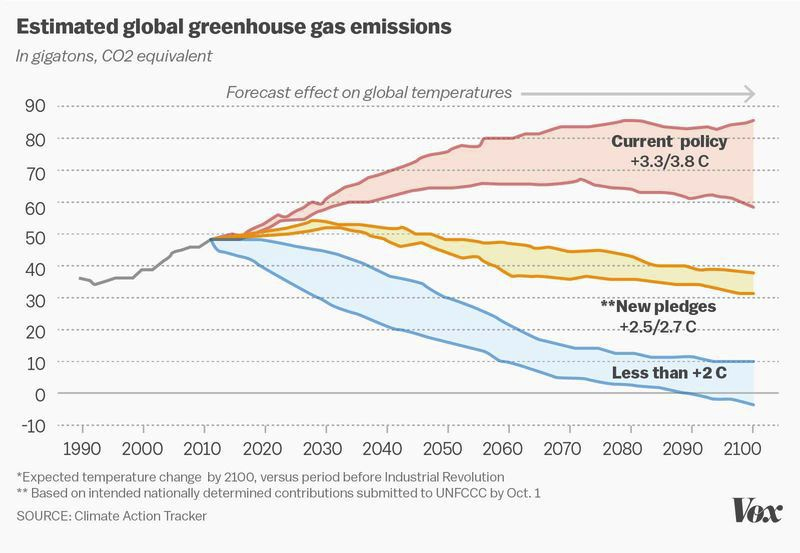 This first table shows that the world’s current policy will still lead to an increase of minimum 3.3 degrees celsius by 2100, and a maximum of 3.8. Other data shows even less encouraging ‘results’, such as:

This other graph published by Sanford, Todd; Frumhoff, Peter C.; Luers, Amy; Gulledge, Jay (2014) instead shows a much more grim outlook, it would seem that we are well on our way to an increase of 5 degrees celsius by 2100. Critics of the Paris Accords have stated that to meet the goals of 2030, countries would have to double, if not triple, their emissions.

Articles such as those by Stephen Leahy in National Geographic, seem to place the economic cost of such climate catastrophe before the human cost, even if and when the media picks up on climate change, they seem to first consider the economic cost of it rather than the possible millions of deaths and billions of lives affected, which happen to be largely in exploited nations. Even the Federal Reserve Chairman Jerome Powell outright stated that climate change is not something they are considering when implementing policy, and he has said this not in the 1990s but in 2021!

What only goes to worsen these pacts and agreements, is that they are not binding. The COP26 conference produced the Glasgow Climate Pact, which is not binding for any of the signatories, and thus it holds capitalists to invisible standards. These pacts only go to placate the masses, to show the people that “Yes we are doing something, look, we even signed this piece of paper!”. And thus, faux environmentalism is seemingly perennial and never-ending. The further we delve into a climate catastrophe, the more pacts and agreements are signed, which even if adhered to are nowhere near enough to counteract more than a hundred years of carbon emissions.

Another lie that we are fed time and time again, one that goes hand in hand with faux environmentalism, is that of overpopulation. The media and politicians would want us to believe that one of the possible solutions to the climate catastrophe is to reduce the number of humans, and thus reduce consumption. This is nothing but malthusian, eco-fascist garbage, and we know that this would only affect the less fortunate. While billionaire capitalists go around in their private jets, they advocate for culling large parts of the population, in hopes that all these non-existent people will make up for their enormous emissions.
As told above, the capitalists will never actually address the catastrophe, as long as there is profit to be made in the current status quo, and money to be lost in changing the system, they will never come up with solid, long-term solutions. It is then obvious, we do not need to sign more pacts, or agreements, but rather, we must overthrow the system – the same one that lies to us, and keeps us at bay with this faux environmentalism which will in turn potentially kill millions and affect the lives of billions of people around the planet. The solution is to overthrow the system, and replace it with one that is not based on infinite growth, and one that takes ecology and environmentalism seriously rather than a cost-benefit one.